It’s undeniable that the coconut is a superfood of sorts. Both the flesh and the juice of this tropical nut come loaded with nutrients, which is why we used dehydrated coconut water in our DetoxOrganics superfood mix.

But the fat that is extracted from coconut flesh is also very high in saturated fat and this has been cause for concern with many doctors and nutritionists.

So who is right? Is coconut oil really as healthy as people claim and can it be used for weight loss, or is this just another health food fad that needs to blow over

There are many more superfoods out there that can be used in combination with coconut oil, or even in place of it if you don’t like the sound of some of the benefits mentioned in this article.

We have discussed these coconut oil alternatives at great length in the following articles, so be sure to check them out: 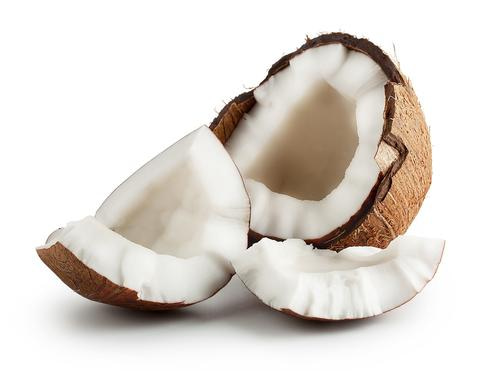 Let’s get this one out of the way first, because not only is it the coconut oil benefit that most users are interested in, but it also seems like the most bizarre on the surface.

After all, how can a calorie-dense fat be good for a weight loss program?

Well, it’s important to note that not only is coconut oil mostly fat, but it’s mostly saturated fat, with around a 90% content.

If you eat it in every meal on top of your usual calorie intake it’s not going to help you lose weight. Far from it.

However, if you replace some of your other calories with coconut oil then it might. It’s important to understand that all calories are different.

A daily intake of 2,000 calories high in refined sugar will cause faster and more significant weight gain than one that is balanced with fiber and important nutrients.

Your body reacts to different food in different ways and this is true of coconut oil as well. It is thought that the medium-chain triglycerides, or “MCTs” (more on those soon) in coconut oil have a higher energy expenditure than the long-chain fats found in dairy.

This suggests that replacing those slow burning fats with the fast burning ones in coconut oil could increase total energy expenditure by over 100 calories a day.

Add to this the potential that coconut oil has shown to suppress appetite and it’s fair to assume that coconut fats can help with weight loss.

3 Other Benefits of Coconut Oil

As mentioned above, the weight loss potential of coconut oil is noteworthy, but not necessarily huge. But there are many more benefits to consuming coconut oil that may be more pronounced.

One of the things that has confounded scientists studying coconut oil is the fact that it seems to be effective at reducing bad cholesterol and raising good cholesterol, even though it’s mostly saturated fat and common sense suggests that it should have the opposite effect.

Several human studies have been able to show that coconut oil can positively impact cholesterol levels, with one finding that it also helped to decrease waist circumstance and body mass.

These studies have yet to show that coconut oil can be more effective at improving cholesterol than “healthy” fats like olive oil, but it’s fair to assume that there is much more to this fat than first meets the eye.

Alzheimer’s disease is one of the top ten causes of death in the United States and the race is on to find a cure, or at least something that can play a role in preventing this disease from occurring in the first place.

There are studies out there that suggest coconut oil can do both. In one 2006 study, the MCTs found in this fat were able to improve brain function in patients with Alzheimer’s, while others have linked it to overall improved brain health.

Healthy fats like those found in coconut can help to improve focus, concentration and memory, especially when compared to someone on a low fat diet.

Good nutrition goes a long way to helping prevent all kinds of neurological diseases and even psychological syndromes, and coconut oil can play a crucial role in maintaining a good nutritional balance.

Coconut fat contains something known as “lauric acid”, which acts as an anti-bacterial agent and also helps to form another compound with similar effects known as “monolaurin” .

These can help to eradicate harmful pathogens in the body, which means coconut oil may help to alleviate some of the symptoms associated with yeast and fungal infections, while also potentially killing some of the more dangerous pathogens that make their way into the human body.

Of course, it’s not as effective as prescription drugs used for these purposes and should never be used in place of them when you are sick.

But it’s definitely an interesting byproduct of coconut oil consumption and means that this fat could play a role in helping scientists to create stronger antibacterial compounds.

It’s worth noting, however, that the act of “oil pulling”— whereby you rinse your mouth out with coconut oil and then spit in order to destroy oral bacteria — has not proved to be more effective than performing the same ritual with water, even in the face of these antibacterial effects.

Conclusion: Can Coconut Oil Help you to Live Longer?

There are several island populations that consume significant quantities of coconuts and are known to be very healthy, much more so than people in the west.

This is true for Polynesian, Sri Lankan and Filipino cultures and this statistic is often cited by fans of this fat.

However, you have to take this info with a pinch of salt, or rather a basketful of greens, because these populations also consume less refined sugar and processed foods than we do and they consume a diet rich in fruits and vegetables.

In other words, coconut oil is probably not a miracle substance on its own, but it can certainly help when consumed as part of a healthy, balanced diet, as these island populations prove.

So make sure you eat plenty of fruits and vegetables along with consuming coconut oil, and if you want a simple shortcut buy a tub of DetoxOrganics, which contains all the healthy superfoods you body needs in one delicious scoop — including all the goodness of coconuts!