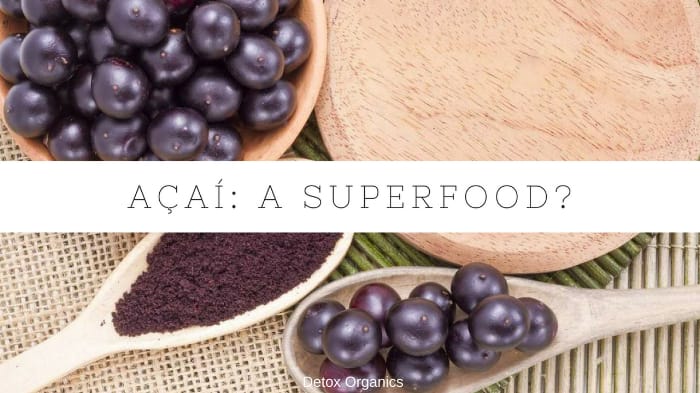 Açaí berries have been the superfood of choice for many dieters over the last few years, taking over the mantle from the likes of goji berries and blueberries and earning a reputation as a true super fruit that has magical, cleansing and restorative powers.

But just like goji berries before it, a lot of those claims are exaggerated and some of them are false, which begs the question, is the açaí berry cleanse, and everything else associated with this fruit, complete nonsense, or is there something to this cleanse and this fruit in general?

Get the Best of Açaí Berry and More with DetoxOrganics

How to Pronounce Açaí Berry

Let’s just quickly address this, because there is a lot of uncertainty and the issue here is that the mispronunciations don’t sound anything like the real one, so it can make things very confusing.

It’s not “Ah-Kai” as you might think, nor is it “Ah-Cye”, but “Ah-Sigh-Eee”. This tiny word got a little greedy with the syllables, didn’t it?

What is the Açaí Berry Cleanse?

The açaí berry cleanse is a product that can apparently help to detox your body. It typically contains açaí berry as a main ingredient, but because it is expensive, it’s rarely the only ingredient and there are other fruits and extracts bundled in with it, including pomegranate and blueberry.

These are healthy fruits and research has shown that the ingredients in this cleanse can help to promote optimum health, both by aiding the liver in performing its natural functions and by eliminating free radicals. However, it will not do many of the things that the manufacturers claim.

Some claims are reasonable and simply state that it is a detox product that will help to “flush out toxins”, which is true. However, the issues with açaí berry cleanses stem from the claims that it is a magical weight-loss ingredient and that this cleanse will help you to shed pounds overnight. It’s an antioxidant mix, which means it is no more useful as a weight loss tool than a cup of tea or a punnet of blueberries.

What’s more, many of the beneficial ingredients that may be able to help with weight loss have been left out. If you were to eat açaí berries, blueberries, pomegranates and everything else contained within this cleanse, you would fill up on soluble fiber, which in turn would satiate your hunger and potentially stop sugar binges.

You would also get a host of vitamins, minerals and enzymes, as well as plenty of filling liquids from consuming whole fruits. But with this cleanse, you’re only getting extracts and none of that fiber or liquid is present.

Does the Açaí Berry Cleanse Work?

In the sense that it floods your body with antioxidants, vitamins and minerals, yes it works. But the açaí berries may be more beneficial when taken on their own, as opposed to when they are reduced to an extract and taken in pill or powder form.

So rather than paying over the odds for a bottle of pills labelled as an açaí berry cleanse, just buy some of the berries and incorporate them into a natural cleanse of your own creation.

This should involve a host of superfoods, preferably in the form of a single powder like Detox Organics. On top of this you want to be consuming plenty of water and fresh fruit.

That way, not only will you get the enzymes, antioxidants, minerals and vitamins from countless healthy foods, but you’ll also get the fiber your body needs to fight those hunger pains.

Of course, a cleanse isn’t a magical solution to all of your problems and it’s not the only way to get rid of toxins, your liver will do that naturally.

But if you are suffering from constipation, gas, headaches and other symptoms of a bad diet and an excessive amount of low quality calories, then a few days consuming nothing but healthy whole foods and extracts can help to press the reset button, reducing the excess of sugar, sodium and chemicals in your body and allowing your digestive system to get back to normal.

About two thirds of all açaí berry cleanse reviews are positive, and the rest of them are usually filled with frustration, claims that it’s a scam and general displeasure.

We’re not in a position to say that most positive reviews are fake and we’re not going to do that, mainly because we don’t believe that to be the case.

However, we can say with absolute certainty that most of the claims being made are not backed up by any legitimate science and in some cases they are also devoid of common sense. That alone should tell you what you want to know, but probably not what you want to hear, and therein lies the problem.

Weight loss products like this rely on desperation. They are targeting a market that is fueled by self-esteem and confidence issues and the manufacturers manipulate that.

This is the most popular version of the açaí berry cleanse, one that is sold at many health food stores and even grocery stores.

As with all other açaí berry cleanses, it floods your body with antioxidants and probably helps you to feel better, but it isn’t a magical elixir, it won’t help you to lose weight and it won’t come close to doing all of the magical things that some manufacturers claim.

It’s also very expensive for a simple antioxidant blend, not to mention highly processed. You are much better off with a tub of high grade matcha tea, some quality green tea or even a few bars of dark chocolate. You will get all the antioxidants without any of the fillers and any of the absurd promises.

It’s worth noting that açaí berries are very nutritious and 100% deserving of their status as superfoods. As you’ve already seen, we don’t have a lot of good things to say about the açaí berry cleanse, but the fruit itself is top drawer. Nutritionally speaking they are closer to avocados than blueberries as they contain healthy fats (including omega-3s), polyphenols, vitamins A, C and E, and a few other key nutrients.

The problem is that there are cheaper ways of getting these nutrients and açaí berries are not ideal if you’re on a diet. They also need to be freeze dried just after picking in order to retain their health benefits, which is why you will often use preparations of freeze dried powder and juices.

Speaking of which, while the juice might seem like the cheapest, tastiest and easiest way to get an açaí berry health fix, it’s not. These juices are often made from concentrate to preserve them over long distances and to cut down shipping costs. They also contain preservatives. One of the most popular varieties contains fructose, citric acid, ascorbic acid and potassium sorbet, as well as the concentrated juice.

You will benefit from the antioxidants and you will pay less, but you’re much better off with some fresh berry juice or better yet, a punnet of fresh whole fruits. After all, if there is no magical properties to açaí berries as the literature suggests, and if the nutrients found in them can also be found in many other fruits and vegetables, then why go to the trouble for açaí berries?

Want the full benefits of açaí? Now you can with Detox Organics! Click here!